Cogeco releases its results for the third quarter of fiscal 2019

Following Cogeco Communications' announcement on February 27, 2019 of the agreement to sell Cogeco Peer 1 Inc., its Business information and communications technology ("Business ICT") services subsidiary, the operating and financial results from this subsidiary for the current and comparable periods are presented as discontinued operations separate from the Corporation's continuing operations.

For the third quarter of fiscal 2019:

“Once again we are very satisfied with our overall quarterly performance as the results of the third quarter of fiscal 2019 are in line with expectations,” declared Philippe Jetté, President and Chief Executive Officer of Cogeco Inc.

“At Atlantic Broadband, we continue to see solid organic growth,” added Mr. Jetté. “We are seeing the benefits of our amplified marketing activities with a significant increase in our primary service units, demonstrating our American broadband services operations' position as a growth driver for Cogeco Communications.”

“On April 30 we completed the sale of Cogeco Peer 1, our Business information and communications technology operations, to affiliates of Digital Colony. This transaction resulted in a gain and allows the Corporation to focus on the growth of our broadband business,” added Mr. Jetté.

"Finally, at our radio subsidiary Cogeco Media, we are still experiencing the effects of a weak market, however we are pleased to see that our top stations continue to maintain strong ratings," concluded Mr. Jetté.

(1)       The indicated terms do not have standardized definitions prescribed by IFRS and, therefore, may not be comparable to similar measures presented by other companies. For more details, please consult the “Non-IFRS financial measures” section of the MD&A. 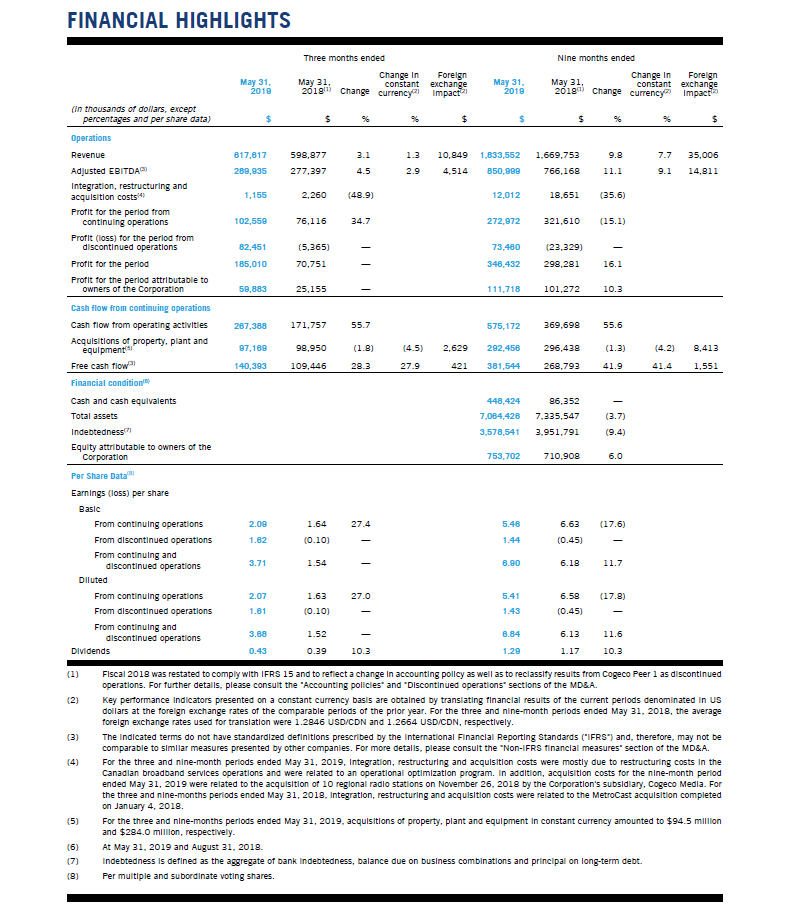