Cogeco releases its results for the second quarter of fiscal 2019

Following Cogeco Communications' announcement on February 27, 2019 of the agreement to sell Cogeco Peer 1 Inc., its Business information and communications ("Business ICT") services subsidiary, operating and financial results  for the current and comparable periods were reclassified as discontinued operations.

For the second quarter of fiscal 2019:

“We are very satisfied with our overall results for the second quarter of fiscal 2019,” declared Philippe Jetté, President and Chief Executive Officer of Cogeco Inc.

“In our Canadian broadband services operations, Cogeco Connexion’s results and operations have been returning to levels that are in line with its performance before the implementation of a new advanced customer management system in fiscal 2018 which impacted operating results of the last few quarters,” stated Mr. Jetté. “We are pleased to see increases in both revenue and adjusted EBITDA compared to the same quarter of last year.”

“At Atlantic Broadband, our American broadband services operations, I am delighted to report that we continue to see solid organic growth,” continued Mr. Jetté.

“At the end of the second quarter of fiscal 2019, we reached an agreement to sell Cogeco Peer 1, our Business ICT services subsidiary, to affiliates of Digital Colony. This transaction will allow Cogeco Communications to focus its resources and efforts on our Canadian and American broadband services operations, with greater flexibility to pursue organic investment and acquisition opportunities,” added Mr. Jetté.

“At Cogeco Media, our radio business, the highly challenging state of the advertising market continues to be reflected in our results. However, the integration of our 10 new radio stations is proceeding very positively and we are excited at the prospect of further enriching our offering throughout the province of Québec,” concluded Mr. Jetté.

(1): The indicated terms do not have standardized definitions prescribed by IFRS and, therefore, may not be comparable to similar measures presented by other companies. For more details, please consult the “Non-IFRS financial measures” section of the MD&A.

Cogeco Inc. is a diversified holding corporation which operates in the communications and media sectors. Its Cogeco Communications Inc. subsidiary provides residential and business customers with Internet, video and telephony services through its two-way broadband fibre networks, operating in Québec and Ontario, Canada, under the Cogeco Connexion name, and in the United States under the Atlantic Broadband brand (in 11 states along the East Coast, from Maine to Florida). Through Cogeco Peer 1, Cogeco Communications Inc. provides business customers with a suite of information technology services (colocation, network connectivity, hosting, cloud and managed services), by way of its 16 data centres, extensive FastFiber Network® and more than 50 points of presence in North America and Europe. Its Cogeco Media subsidiary owns and operates 23 radio stations with complementary radio formats and extensive coverage serving a wide range of audiences mainly across the province of Québec, as well as Cogeco News, a news agency. Cogeco’s subordinate voting shares are listed on the Toronto Stock Exchange (TSX: CGO). The subordinate voting shares of Cogeco Communications Inc. are also listed on the Toronto Stock Exchange (TSX: CCA). 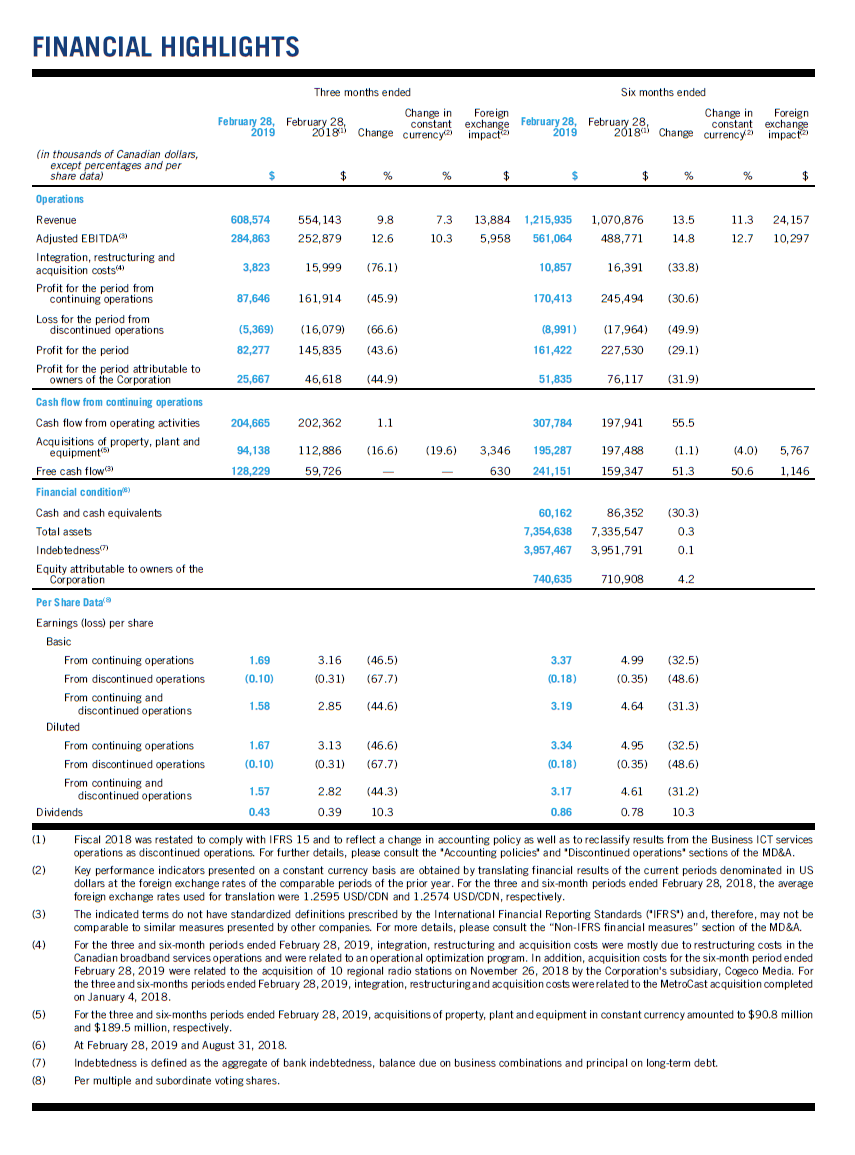