Cogeco Inc. Releases Its Results for the Fourth Quarter of Fiscal 2017 and Increases Its Dividend

For the fourth quarter of fiscal 2017:

(1)     The indicated terms do not have standardized definitions prescribed by IFRS and, therefore, may not be comparable to similar measures presented by other companies. For more details, please consult the “Non-IFRS financial measures” section of the Management’s discussion and analysis (“MD&A”) of the Corporation's 2017 Annual Report.

“For the last quarter of fiscal 2017, our subsidiary Cogeco Communications Inc.’s performance was in line with expectations,” declared Louis Audet, President and Chief Executive Officer of Cogeco Inc. “Overall, in the Canadian broadband services subsidiary, Cogeco Connexion’s results over the course of the fiscal year have been very positive, with increases in revenue, EBITDA and free cash flow.”

“In our American broadband services subsidiary, Atlantic Broadband continues to generate strong growth,” stated Mr. Audet. “In addition to its continued expansion in Florida, a region with a strong potential for growth, Atlantic Broadband has seen significant expansion in both residential and business revenue in its Connecticut system, acquired in August 2015.”

“In our Business ICT subsidiary, we continue to focus on improving Cogeco Peer 1 results in a highly competitive market where conditions are changing ever faster,” added Mr. Audet. “Our focus remains on bringing more relevant solutions to the market and cross-selling our services, positioning ourselves as a trusted advisor offering the whole breadth of relevant enterprise services. In addition, we have generated meaningful free cash flow reflecting our focus on optimizing our asset base.”

"Finally, when we look at our radio subsidiary Cogeco Media, the latest Numeris results confirm that we continue to maintain our leadership position in the Québec radio market, with very strong audience ratings,” stated Louis Audet. "Our results are in line with expectations, despite an advertising market that is increasingly under pressure.”

“As we close our fiscal 2017, I am satisfied with the solid performance of Cogeco. I am very proud that our results were in line with or exceeded our financial guidance for the year across all key performance indicators,” concluded Mr. Audet. 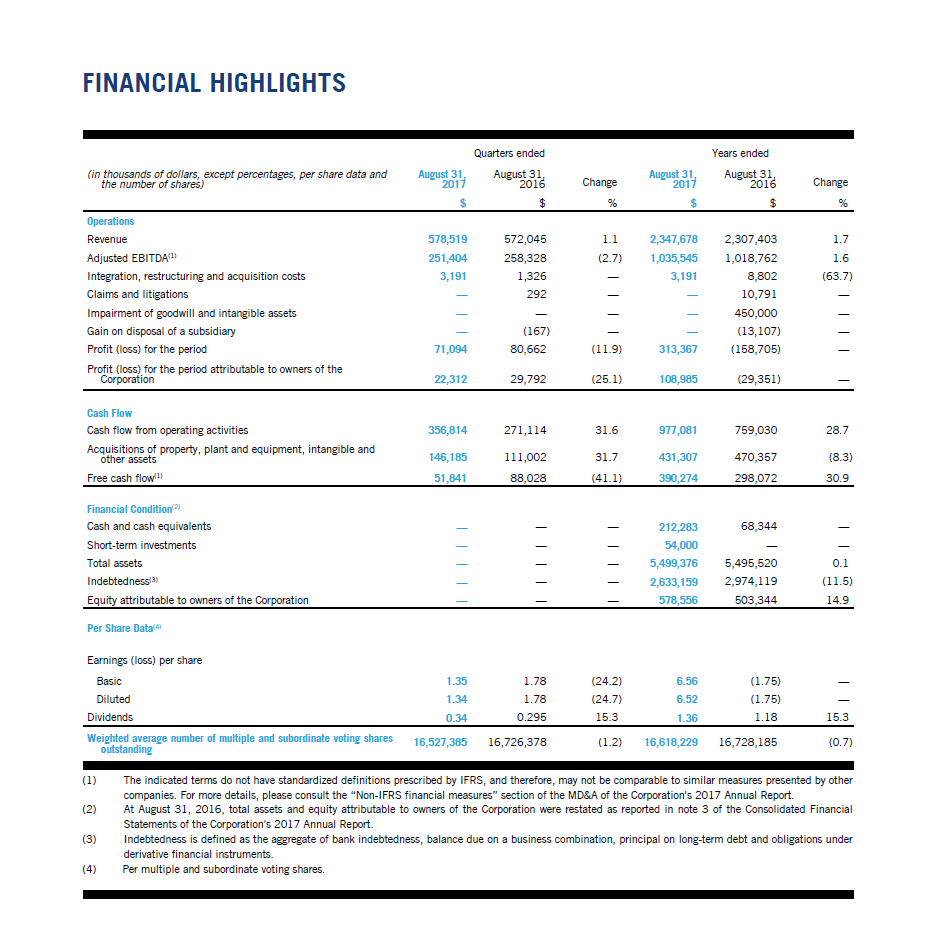 Cogeco Inc. is a diversified holding corporation which operates in the communications and media sectors. Through its Cogeco Communications Inc. subsidiary, Cogeco provides its residential and business customers with Internet, video and telephony services through its two-way broadband fibre networks. Cogeco Communications Inc. operates in Canada under the Cogeco Connexion name in Québec and Ontario, and in the United States under the Atlantic Broadband name in western Pennsylvania, south Florida, Maryland/Delaware, South Carolina and eastern Connecticut. Through Cogeco Peer 1, Cogeco Communications Inc. provides its business customers with a suite of information technology services (colocation, network connectivity, hosting, cloud and managed services), through its 16 data centres, extensive FastFiber Network® and more than 50 points of presence in North America and Europe. Through its subsidiary Cogeco Media, Cogeco owns and operates 13 radio stations across most of Québec with complementary radio formats serving a wide range of audiences as well as Cogeco News, its radio news agency. Cogeco Inc.’s subordinate voting shares are listed on the Toronto Stock Exchange (TSX: CGO). The subordinate voting shares of Cogeco Communications Inc. are also listed on the Toronto Stock Exchange (TSX: CCA).